Chef Ricky Moore, a native of New Bern and US Army veteran, owns Saltbox Seafood Joint in Durham. He trained at the Culinary Institute of America. He is the former Executive Chef of Agraria Restaurant in Washington, D.C., a farm-to-table concept owned by the North Dakota Farmers Union. In 2005, he was the recipient of the Chicago Tribune’s Good Eating Award in 2005. In addition, he was a Chef-advisor to Green Youth Farm, an affiliate of the Chicago Botanical Garden, and Common Threads, an organization founded by Art Smith to teach children cultural diversity through food and cooking. Moore's cooking style can be described as a contemporary  interpretation of classical, regional and global cooking.

Saltbox Seafood Joint offers seasonal, fresh seafood that is delivered fresh from the North Carolina coast. For this reason, the menu is handwritten daily based on seasonal availability. The business was inspired by classic American fish camps and waterside seafood shacks. 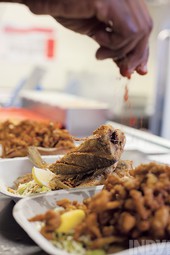